The City of Pueblo Public Works Department was awarded a $289,000 grant from the Colorado Department of Public Health and Environment’s Resource Recycling Economic Opportunity Fund.

reuse reduce recycle imageAfter years of discussion and strategizing, the idea of a free, centrally located drop-off center for recyclable items will become a reality in Pueblo. Located on Stockyard Road (former city animal shelter location), the site is scheduled to open in spring 2018.

Riotous and disordered as the universal commotion now was, it soon resolved itself into what seemed a systematic movement; for having clumped together at last in one dense body, they then renewed their onward flight with augmented fleetness. Further pursuit was useless; but the boats still lingered in their wake to pick up what drugged whales might be dropped astern, and likewise to secure one which Flask had killed and waifed. The waif is a pennoned pole, two or three of which are carried by every boat; and which, when additional game is at hand, are inserted upright into the floating body of a dead whale, both to mark its place on the sea, and also as token of prior possession, should the boats of any other ship draw near.

The result of this lowering was somewhat illustrative of that sagacious saying in the Fishery,—the more whales the less fish. Of all the drugged whales only one was captured. The rest contrived to escape for the time, but only to be taken, as will hereafter be seen, by some other craft than the Pequod.

The previous chapter gave account of an immense body or herd of Sperm Whales, and there was also then given the probable cause inducing those vast aggregations.

Now, though such great bodies are at times encountered, yet, as must have been seen, even at the present day, small detached bands are occasionally observed, embracing from twenty to fifty individuals each. Such bands are known as schools. They generally are of two sorts; those composed almost entirely of females, and those mustering none but young vigorous males, or bulls, as they are familiarly designated.

In cavalier attendance upon the school of females, you invariably see a male of full grown magnitude, but not old; who, upon any alarm, evinces his gallantry by falling in the rear and covering the flight of his ladies. In truth, this gentleman is a luxurious Ottoman, swimming about over the watery world, surroundingly accompanied by all the solaces and endearments of the harem. The contrast between this Ottoman and his concubines is striking; because, while he is always of the largest leviathanic proportions, the ladies, even at full growth, are not more than one-third of the bulk of an average-sized male. They are comparatively delicate, indeed; I dare say, not to exceed half a dozen yards round the waist. Nevertheless, it cannot be denied, that upon the whole they are hereditarily entitled to EMBONPOINT.

When serenely advancing on one of these journeys, if any strange suspicious sights are seen, my lord whale keeps a wary eye on his interesting family. Should any unwarrantably pert young Leviathan coming that way, presume to draw confidentially close to one of the ladies, with what prodigious fury the Bashaw assails him, and chases him away! High times, indeed, if unprincipled young rakes like him are to be permitted to invade the sanctity of domestic bliss; though do what the Bashaw will, he cannot keep the most notorious Lothario out of his bed; for, alas! all fish bed in common. As ashore, the ladies often cause the most terrible duels among their rival admirers; just so with the whales, who sometimes come to deadly battle, and all for love. They fence with their long lower jaws, sometimes locking them together, and so striving for the supremacy like elks that warringly interweave their antlers. Not a few are captured having the deep scars of these encounters,—furrowed heads, broken teeth, scolloped fins; and in some instances, wrenched and dislocated mouths. 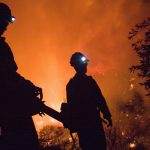